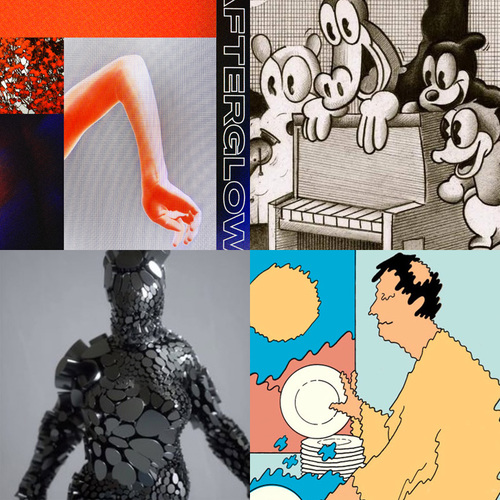 'Visualized!': A new series of posts about artists you should know!

One of my favorite things about THE BRILLIANCE! has always been posting about artists & designers who have made an impact on me in some way personally, professionally, or creatively. Sharing other's work has become an essential part of who I am as an artist and I want to canonize that here in a new ongoing series of posts I'm calling 'Visualized!'. I'll highlight 4 people/studios/etc. whose work has left a lasting impression on me and that I feel readers should know, if you don't already. Enjoy.

Hassan Rahim — A NYC-based artist & art director, Hassan is one of the people responsible for what I consider to be a real shift in the paradigm of modern graphic design. His work has an effortless, dark beauty about it that many seem to imitate but few get quite right. One of my favorite album covers of 2016 was Gonjasufi's 'Callus' and almost right away I wondered, correctly, if it was Hassan's. Don't ask him if he designed the new Nick Jonas album though. He didn't. You're thinking of the Jacques Greene record that came first.

Andrew Savage — Andrew Savage is a visual artist & musician, most well-known as the frontman for Parquet Courts. I wish he had a portfolio I could link to but he doesn't, so in the meantime enjoy that ItsNiceThat writeup to get to know him & his work a bit more. Parquet Courts have what I consider to be the best visuals for an active rock band in the world today, honestly. I don't think it's a stretch to be reminded of what Raymond Pettibon did for Black Flag. The art and music go hand-in-hand, almost can't exist without each other. The 'Human Performance' record is really a thing of beauty.

Esteban Diácono — Esteban Diácono is a motion graphics designer who leaves me speechless every time I see his work pop up in my Instagram feed. I often send friends DMs of his posts with just a "!?!" note attached, and they respond with something like "!!!!!". Really a modern 3D master of the human form but in a sort of hallucinatory fever dream kind of way. Check his Instagram for more recent/frequent experiments. This set is just too wild.

Ryan Travis Christian — I couldn't go this first 'Visualized' post without including a Chicago selection. Ryan Travis Christian is one of my favorites - his work feels comforting and familiar yet unsettling in the kind of way KAWS' work often does: rooted in characters and illustration you feel like you've seen before but rendered in an entirely different, dark and strange yet oddly perfect way. Black & white graphite drawings pulling inspiration from late 20's/early 30's cartoons made up of surreal, amorphous blob-like creatures and Mickey Mouse & friends variations that creep you out and win you over at the same time. His patterns and composition are incredible too, really he's a fine artist with a veteran designer's eye. Ryan is represented by Western Exhibitions in Chicago, so if you're ever in town go check them out.