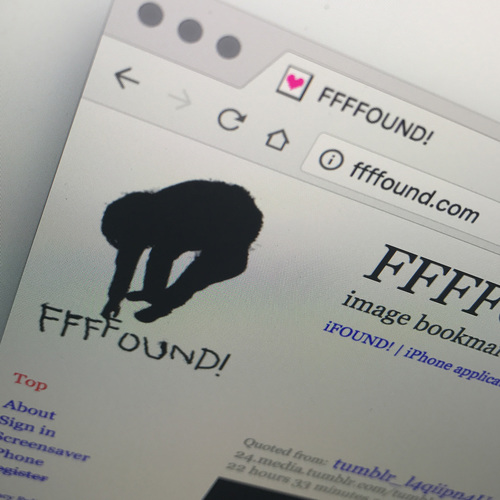 The death of FFFFound & the endless pursuit of image collection...

If you use the internet, which you do, you've saved images you've found interesting for whatever reason somewhere at some point. Inspiration for a current or future project, how to arrange the books on your office shelf, inspiration for an outfit, a haircut, a party, whatever. The most primitive way to do this, of course, would be to actually save the image from website to folder on your desktop, or worse, screenshot it directly to your desktop into a sea of tiny thumbnails unlikely to be referenced ever again. Back in 2007, Japanese design firm Tha, responsible for projects with Wonderwall and MUJI among others, launched what soon became the solution to this disorganized approach for many creative types by launching FFFFound.com, in their words, a "web service that not only allows the users to post and share their favorite images found on the web, but also dynamically recommends each user's tastes and interests for an inspirational image-bookmarking experience!!" I know a lot of designers whose desktops became a lot neater after FFFFound launched, which if you used it consistently, effectively kept all your 'inspiration collection' in one neat web-based place. Kind of a godsend if you ask me, and consider Pinterest didn't launch until 3 years later in March 2010(!). So - FFFFound was pretty ahead of its time and had a great BRILLIANCE-esque barebones design, very content-first, website-second. Fast-forward to 2017 — the beloved FFFFound will be shutting down 24 hours from now as I write this on Monday, May 15 according to a note currently posted on the site. This A) bums me out, because FFFFound was great, and B) got me thinking about how I harvest imagery from the internet that's worthwhile to me now. I tried Pinterest for a minute, even had the little Chrome plug-in, but it just didn't really stick. It does the job, but...I don't know. It's like this BRILLIANCE update - we painstakingly designed our backend CMS to look and feel just like the front-end. The environment in which you play is important. Instagram recently added a Bookmark feature which you can sort into Collections, which is cool but limited to the Instagram platform, not the web. Twitter...I mean, I just like way too many posts to ever effectively reference anything back. Actually, I realize I often 'like' Tweets simply as an acknowledgement to the author so I don't have to reply...maybe Twitter needs to design an "Acknowledged" icon to live next to the heart icon, lol. Like, "Yup, saw your Tweet. Cool" as opposed to "Wow, I actually love this". But anyways...if you're specifically part of the art/design/creative set looking for something, Designspiration is a solid go-to, but still not quite as all-purpose and easy as FFFFound was. So, I'll hold out hope that FFFFound is resurrected someday or hope someone comes along with another dead simple, brutalist Drudge Report-like anti-design image bookmarking/sorting platform. Until then, it's back to drag-and-drop.