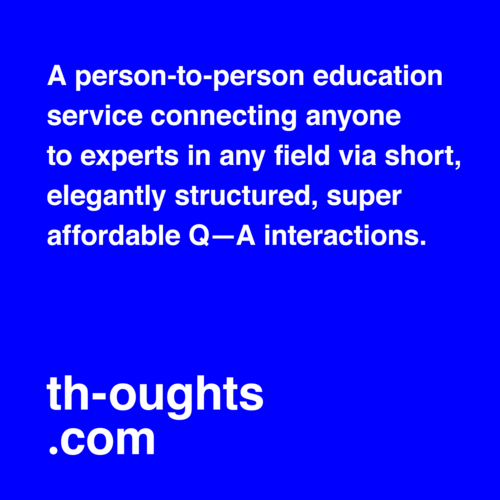 That th-oughts thing I launched!

"A person-to-person education service connecting anyone to experts in any field via short, elegantly structured, super affordable Q:A interactions."

This whole thing started with: all "those" kids sending cold emails, DMs, @s, comments, running up to people on the street/at the airport, the "lets build fam" kids, pick-your-brain-over-coffee kids, etc, etc that used to be (still are?!) perceived as annoying/bothersome. Thing is – I love those kids! Honestly! Those kids are are looking to educate themselves from people THEY decide are worthy to be teachers...sorry, but I fucking love that concept. Those kids are leveraging this beautiful thing us humans have, the internet, to move whatever it is they're working on forward as fast as possible. Again, I love that. The issue is that DMs, cold emails, random @s, comments, etc, etc are not really efficient channels...there isn't any "friction" as we call it - in our case, the $10 fee, there wasn't enough brutally simple structure - as we think we've created. And while there are some somewhat similar competitors, we don't think anyone is doing it tastefully.

So we created it.

It's quite small yet still - but "its working" as we say. I love being able to say that, honestly. I almost quit this project twice. I was so worried (still am?) it was going to be perceived as corny by the community/culture. Was worried it wasn't going to work. Was worried it was an entirely too-simple/dumb idea. Again, we're super tiny still - too early to start planning what I'll wear on stage at All Things D with Kara Swisher, lol, but we're pretty stoked on where its at right now and what the next few months look like.

THANK YOU to all the kids who've used it - seriously. Thank you to our experts. And super thank you to Zac and Charles for being part of the team to make this happen...its about to be super fun this year.

***End goal is to put a ding in traditional education.