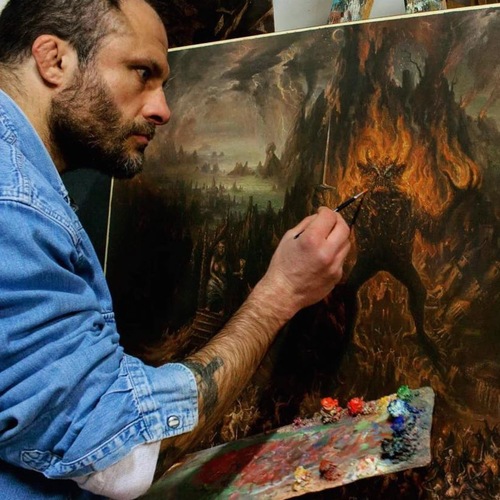 All I wanted to know was who did the album cover for Power Trip's 'Nightmare Logic', one of my favorite heavy records of 2017. I expected to find a reclusive American painter with long hair who doesn't talk much. What I found was so, so much more than that. What I found was my new favorite Instagram follow. What I found was --- Paolo Girardi. Paolo is a 43 year old Italian painter who seemingly only creates his paintings for album covers of the metal variety. Doesn't matter what kind of metal - power, black, grind, thrash - just needs to be loud and heavy. I've actually seen his work on many record covers over the years but never took the time to find out who the artist was. So far this doesn't sound particularly unique, surely there are a lot of artists out there who do work in this vein. But!! Have you seen his Instagram!? Honestly, finding his Instagram was a bit like seeing a band live who you were only familiar with because of one or two songs, then being blown away by the live performance and leaving with a t-shirt and listening to them on the drive home. I'm really fascinated by this guy! Not only does Paolo post his intricate paintings...Paolo posts videos of himself in his studio lifting weights (he's huge!), in ripped tank tops, denim shorts, no shirt at all, going to bed in his studio on a cot with snowflake pajama pants on. He really is the embodiment of his own work. But none of this is an act or an ironic vibe, this is just who Girardi is and, according to this interview, who he always has been. From that interview: "I’ve never changed my “style” since the late ’80s/early ’90s. That’s all. I am a bit out of date, some people call me a dinosaur, stubborn huge brick wall, or Neanderthal man, actually. Well, Italian ladies hate my old style." Well, their loss. Get lost in Paolo's world on his Instagram, link below.