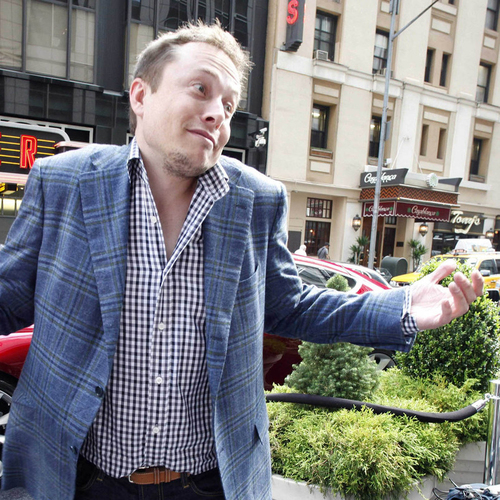 Elon Musk interviews, his optimism, and *actually* making a dent in the universe.

If you've been a reader of the brilliance for a minute - you know I used to often write about Steve Jobs and Jay-Z. They were, and continue to be, incredibly influential people to me. I joke that my formal education is listening to Jay-Z while I learned classic ASP and SQL in my parents basement in high school int eh late 90s, ha, it worked out well. Anyway, Elon is a rather obvious recent addition to those two characters. I was always familiar with his work, but it wasn't until about 2-3 years go that I started digging in heavy on the interviews, the book Ashlee Vance wrote about him (please, please, please read it!), and his general back story. Probably too much to say in this brief post... But man, he is truly the definition of following your convictions, no? And to proper extremes...going for broke (and going broke!) on unimaginably (honestly!) ambitious projects. His stated, and 2 of 3 pretty much accomplished, goals are to disrupt the auto industry, remove dependence on fossil fuels entirely, and make our species multi-planetary. And!! Doing it all with great taste! Thats not even considering Neuralink...

So, the only real point of this post is two things: (1) to highlight a few interviews worth watching and (2) this quote from Larry Page on craziness and luck:

"...I mean we just have a single proof point now that you can be really passionate about something that other people think is crazy and you can really succeed. And you look at it with Elon and you say, ‘Well, maybe it’s not luck. He’s done it twice. It can’t be luck totally.’ I think that means it should be repeatable in some sense. At least it’s repeatable by him. Maybe we should get him to do more things.”

Sam Altman/YC interview - The quote about fear in this one is quite good.

LOL on him crashing his uninsured McClaren F1.

*Steve Jobs always said he wanted to make a ding/dent in the universe. I love that, though he was prone to hyperbole a bit...it's funny, Elon is the only human we have right now that is doing so in a more literal, less hyperbolic (no orbital trajectory pun intended) way.