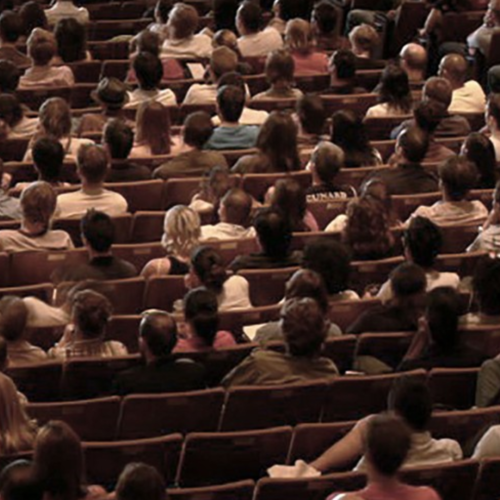 Break a leg! A quick guide to public speaking.

I first spoke in public at the 2005 Semi-Permanent Design Conference at Lincoln Center in NYC when I was barely 20 years old in front of 1,200+ people (and Benjamin who was there in like the 2nd row!). When I say "first spoke" I mean that literally - I had never spoken in public before. Not in high school, not in college (well, I didn't go to college), not at a smaller event or on a panel. Just me, on stage, in front of all these people who knew of me because of the internet, for a full hour. That's a long time for anyone to be on stage, let alone someone doing it for the first time. Fortunately I didn't bomb or anything, but I did spend the first 40~ minutes of my time talking, mostly forgetting to actually show my work. Ha. I managed to show everything I needed to show in that last 20 minutes but it was far from a perfect presentation. Since then I've been a part of about 50 or so speaking events and panels and gotten a lot better, mainly because at 32 I'm generally better at preparing, know myself a lot better than I did at 20, and most importantly, rely on my material. While I'm no expert, here are a few tips I've learned over the years for anyone who ever has to get up in front of a crowd and make it through without having tomatoes thrown at you.

•Prepare! I know it seems like a given, but you'd be amazed at how many people don't prepare, then get on stage and just kind of ramble on. I'm not one to have a super structured Keynote, but I know how important it is to gather and organize my material in a way that tells some kind of story, chronological or not. At the very least, preparing allows you to...
•Rely on your material! If you prepare yourself, whether via a perfectly structured Powerpoint with speaker notes or just a slideshow of images and a piece of scrap paper with a few bulleted notes, you'll be able to get up there and let all that preparation you did do the talking, with you as the vehicle for it. If that makes sense? At a recent speaking event I did in Boston, I decided to forgo a 'typical' presentation altogether. I showed my name, social handles, website, etc. in a huge font in the Notes app, then used my new website to share my work. It was unconventional, especially for a designer, but it kept the vibe loose and I was still prepared. Plus I'd just spent a year finishing up the site so I knew it like the back of my hand.
•Have a story arc. (s/o Tim Saccenti on Twitter for the nudge on this one) Preparing and knowing your material is key, but have SOME kind of story arc. A beginning, middle, and an end. It doesn't have to be chronological, you don't have to be a 'storyteller' (bleh), but you should be delivering some kind of formed narrative.
•Remember there's a reason you're on stage and everyone else isn't. This isn't supposed to be as egotistical an observation as it sounds. But it's true - you were invited to be up there, and the audience is there to see you. Remind yourself of this and be proud of yourself! When a presenter is confident, audiences can feel it and they eat it up. They could be anywhere else but they're not - they're there to hear what you have to say.
•It's OK to be nervous. Even the most seasoned public speakers get butterflies moments before going on stage. It's just natural. I recently heard a theory that the reason people are terrified of public speaking is literally all the eyes on them while alone and, that in evolution, having this many eyes staring at you is instinctively a predatory/prey phenomenon. Fortunately your audience are not wolves and you're not a small animal, so I promise you're not going to be killed...therefore:
•Start strong. The first few minutes of your presentation are so important. This is when the nerves either get worse or go away. Figure out what you're there to say and how you're going to introduce yourself, make people laugh, and realize you're gonna be OK.
•VISUALS! People are there to hear you talk but they're probably also there to see your work. Showing your final product is important but showing your working files, behind-the-scenes, sketches, 'cutting room floor' stuff is so fascinating to audiences. They like knowing you're normal and human. Be relatable and let people know you went through some shit to get where you are. If you have video, even better. Gives you a chance to catch your breath, have some water, and relax.
•Lists. People love lists. If you make a list of something, I promise people will take pictures of it.
•Respect your time. I once spoke at an event where everyone was given 1 hour. There were about 20 speakers. One guy, I won't name names, decided he'd keep going and went for 1.5 hours. This threw the schedule off and made for frustrated organizers and speakers. Don't do this! Keep an eye on your time. Better to finish a little early than be scrambling at the end and feeling the audience's attention wane.

Speaking of an audience's attention span, this post is.......long... ha. Anyways, congrats if you've been invited to do some public speaking! You're gonna be OK.