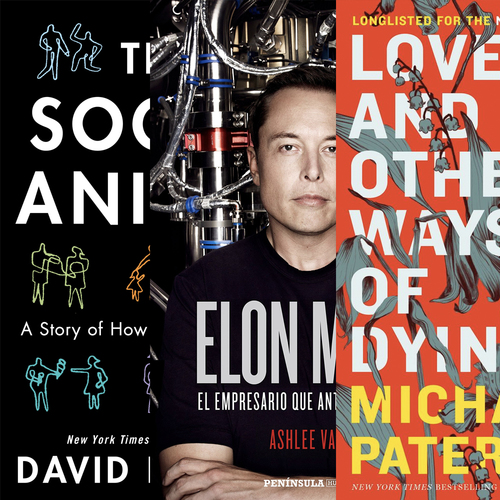 I spent a bit more time than I would have liked to driving this year. Eventually, audio books kind of creep in as a time-killer...and then, for me, they eventually started replacing traditional books. Jury is still out if I'm as good at retaining the information as I am with reading, but I've just become such a fan of the more immersive nature of audio books...2D movies or something, etc. These are my top 3...though, odds are I only listened to maybe 4 or 5, ha.

1—The Social Animal by David Brooks. Wow. Wow. Recommended to me by a "business guy" / close friend, many years my senior...a quiet guy who doesn't spend a ton of time waxing human focused design, the fine details of emotional difference between humans, nurture-vs-nature arguments...just wouldn't call him the kind of guy interested in "elegant minutia" as I'd call it. We're very yin-yang. In fact, so much so that I actually was confused on what I was getting into with this book after he recommended it...it's quite different from my perception of him. It's fascinating how much you can learn from someone via their book recommendations....... Anyway, it's an incredible fictional story of two families and their respective son and daughter from life to death and how nature-vs-ntuture shapes their paths in the most intricate detail entirely powered by/backed up by various studies, scientific journals, census data, economic reports, etc, etc...entirely possible I made this book sound quite boring, but it has had an insane impact on how I see every person around me, friend or stranger.

2—Elon Musk - Tesla, SpaceX and the Quest for a Fantastic Future by Ashlee Vance. Man...if you want to feel simultaneously deeply inspired by what humans are capable of...and feel like you have, effectively, accomplished nothing in your life. Lol. Even if you're already hip to all the insane things Elon has accomplished...the color that this book adds to the "adventure" that has been his life is incredible. Super fun read. One of those books so good you're sad to finish. That said, it ends right around 2015...and you could probably write a book about just the past 3 years of his life. Imagine what the book about him that comes out in 2050 will be like... Business books are usually incredibly corny and boring...this one is the opposite.

3—Love and Other Ways of Dying: Essays by Michael Paterniti. This was a left-field one for me...discovered it in an odd way. While reading the GQ Brad Pitt cover story, which was incredible, I was struck by how great the questions were from the interviewer. How...non-boring they were. How much they brought out of the subject. That is the, very literal (pun/no-pun), genius of Michael Paterniti. After reading the Brad Pitt thing...I googled the journalist and found he had a book of all of his favorite interviews he'd conducted over the past 30+ years as a journalist...and then turned them into essay form. Heart-wrenching years long coverage of a passenger plane crash in the frozen ocean, following the daily life of the chef behind El Buli, eating Ortolans with a dying French leader, documenting the intricacies of race and business in the motel industry of Dodge, TX, spending time with a man who works, without being asked, as a very hands-on suicide preventer on the Nanjing Yangtze River Bridge in China...and so many others. What's magic about him is his use of words. Never in my life have I read writing like that...magical.